Why the electoral battlefield is expanding 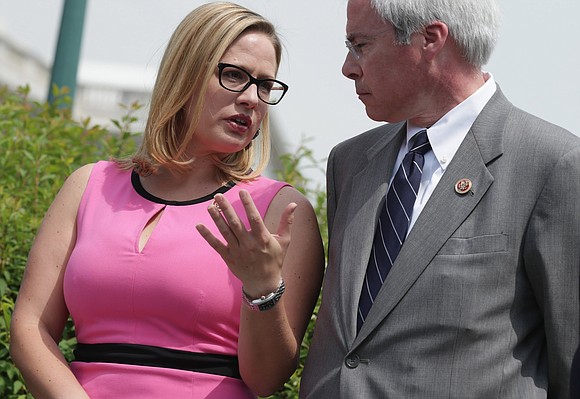 (CNN) -- Two recent polls indicating surprising Democratic strength in Senate races across the Southwest underscore how the parties' shifting demographic and geographic bases of support are widening the electoral battlefield.

The surveys, which point to strong Democratic opportunities to capture Republican-held Senate seats in Arizona and Texas, might prove to be desert mirages by Election Day. But even the prospect of close Senate races in those ordinarily Republican-leaning states, shows how old political alignments are cracking as the parties build new coalitions of support.

In that way, this fall's possible Democratic gains across the Southwest represent a kind of bookend to Donald Trump's Rust Belt breakthrough in 2016, when he narrowly captured three "blue wall" states that had voted Democratic in every presidential race since at least 1992: Michigan, Wisconsin and Pennsylvania.

Each development suggests that after years in which the parties seemed to partition the country into impenetrable spheres of influence, more states may be within reach for both sides. And that could produce a more unpredictable politics that forces both parties to fight across a wider battlefield than either has usually faced in recent years.

This volatility is rooted in the shifting basis of each side's electoral coalition. Beginning before Trump, but accelerating under him, Republicans have established a commanding edge among older, blue-collar, non-urban and evangelical whites. That advantage is strengthening the GOP's long-term position in Midwestern, Appalachian and Great Plains states that remain preponderantly white, heavily blue-collar and still largely dependent on manufacturing, resource-extraction and agriculture for jobs.

Starting in the 1990s, but accelerating since Barack Obama's first election, Democrats, conversely, have grown increasingly reliant on a coalition of young people, minorities and college-educated, secular and single whites, especially women. That is slowly strengthening the party's position in Sun Belt states that are growing more racially diverse, and are also in many cases transitioning faster than the mostly-white heartland states into the post-industrial, information-age economy.

Over the long term, these shifts will likely mean that Republicans win more elections than they do today across Rust Belt states such as Ohio, Iowa and Michigan, and Democrats will make deeper inroads across Sun Belt states from Georgia and North Carolina to Arizona and Nevada.

But the effect today is very different. While these parallel changes are in midstream, they are creating a more competitive balance in both the Rust Belt and the Sun Belt. The result is that the 2018 midterm election and the 2020 presidential race will each likely produce a procession of closely contested races on both fronts.

The 2016 presidential election offered a revealing snapshot of how the partisan balance is evolving in both the Sun Belt and Rust Belt. One way to measure the change is to compare the 2016 presidential outcomes in both groups of states to the results in 2008, when Obama won his sweeping first victory.

But the Democratic margin declined by much greater amounts across the Rust Belt. Obama, for instance, beat McCain in Iowa by 9.5 percentage points while Clinton lost it to Trump by a virtually mirror-image 9.4 points. That's a decline in margin for the Democrats of fully 19 percentage points, nearly four-times the national average. Using the same calculation, the Democratic margin from 2008 to 2016 declined by 17 points in Wisconsin, 14 in Michigan, 13 in Ohio and 11 in Pennsylvania. After Obama won all each of those states both times, Clinton lost all of them -- with Trump squeezing out Michigan, Wisconsin and Pennsylvania by less than one percentage point each. And although Clinton narrowly preserved Minnesota, her margin there declined by nearly nine percentage points compared to Obama's.

Where Clinton gained ground over Obama

Nevada, where Clinton's margin was about 10 points less than Obama's, was the only contested Sun Belt state where Democrats lost so much ground since 2008. But in Colorado, North Carolina and Florida, her margin declined by about four percentage points, less than the national average (with Democrats holding the first and surrendering the latter two.) In Virginia, which Clinton comfortably carried, her margin fell by only one point from 2008. Clinton lost Georgia by almost exactly the same roughly five-percentage-point margin as Obama did in 2008. And she actually narrowed Obama's margin of defeat from 2008 by five points in Arizona and three points in Texas -- over a period when the national popular vote margin, recall, had moved five points toward the GOP.

These changes produced a significant number of relatively close states in both the Rust and Sun Belts. Trump won (in ascending order of margin) Michigan, Pennsylvania, Wisconsin, Florida, Arizona, North Carolina and Georgia, all by 5.1 percentage points or less; Clinton managed relatively competitive victories of 5.3 percentage points or less in Minnesota, Nevada, Colorado and Virginia.

These shifts also produced a telling reordering of the states. Clinton lost Texas by a smaller margin than Iowa; only eight years earlier, the Democratic margin had been over 20 points better in Iowa than in Texas. She lost Arizona, Georgia and North Carolina by much less than she lost Ohio, after Obama had run much better in the Buckeye state than any of the other three. And she won Colorado and Virginia by more than she carried Minnesota after the reverse was true for Obama in 2008.

The 2018 Senate elections will provide the next key gauge of these changes. In the southwest, Democrats are on the offense. In Nevada, Republican Sen. Dean Heller, who is facing Democratic Rep. Jacky Rosen, is considered the single most vulnerable GOP Senate incumbent. In Arizona, which is generally considered the second-best Democratic pickup opportunity, last week's ABC/15 OH Predictive Insights poll showed Democrat Kyrsten Sinema leading all three top competitors in the GOP Senate primary, including Rep. Martha McSally, the highly-touted favorite of the party establishment. All of the Republicans were weighed down by unhappiness with Trump: the poll found his approval among college-educated whites in the state had dipped below 40%, and they now preferred Simena over McSally by double-digits, a big improvement over the usual Democratic performance there.

Even more surprising was the Quinnipiac University poll last week showing Texas Republican Sen. Ted Cruz leading Democrat Beto O'Rourke by only a slim 47% to 44% margin. Democrats have had their expectations in Texas dashed often enough -- most recently when Gov. Greg Abbot resoundingly beat Wendy Davis, the Democrats' highly touted gubernatorial nominee, in 2014 -- to remain skeptical. But the Quinnipiac poll suggested that unease with Trump, whose approval rating had skidded to just 43%, may be creating the conditions for more competitive races in Texas.

While Democrats have benefited from the state's growing diversity, they have struggled to make the inroads among college-educated whites that have boosted them elsewhere. The Quinnipiac Poll, though, showed that slightly over two-fifths of college-educated whites in Texas now disapproved of Trump and slightly under two-fifths said they would support O'Rourke. If Democrats can sustain that white-collar support -- after Clinton and Davis each carried less than one-third of those voters -- they can likely keep Texas within reach, even if it remains tilted away from them.

Trump's visceral connection with many working-class whites in those states creates risk for each of those Democrats. Yet Trump's slippage in these places relative to 2016 raises their odds of survival. In Pennsylvania, for instance, a Muhlenberg College poll showed Trump's approval rating sinking to 39%, and Democrat Bob Casey leading Republican Lou Barletta by double-digits. Among the non-college whites who keyed Trump's Pennsylvania victory in 2018, the president's approval rating had sagged to about even -- and those voters, in turn split almost exactly in half between Casey and Barletta, according to figures provided by Christopher Borick, director of the Muhlenberg College Institute of Public Opinion. Among college-educated whites, who had split evenly between Trump and Clinton in the state, the president's disapproval rating now exceeded his approval by 23 percentage points; among those same voters, Casey, correspondingly, led Barletta by a crushing 19 points.

The common theme across Sun Belt and Rust Belt is that the number of races that neither side can entirely take for granted this fall is surprisingly large. Beyond the closely contested Senate races, both sides are also bracing for tight gubernatorial contests in states from Nevada, Georgia and Florida, to Michigan, Wisconsin and Ohio. In 2020, the same could be true in the presidential race, with Georgia and Arizona (previously safe for the GOP) and Minnesota (reliably Democratic since the 1980s) likely joining the traditional list of roughly a dozen battleground states, and Texas not far behind.

In geology, when tectonic plates shift, earthquakes follow. For the next several years, the same may be true in American politics.