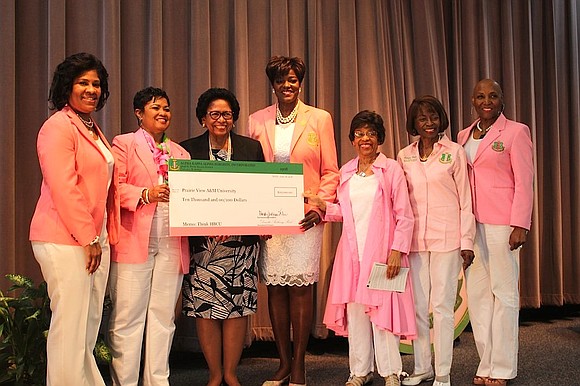 Alpha Kappa Alpha Sorority, Incorporated is historically known for its support of higher education through the awarding of scholarships and charitable donations to educational entities. Prairie View A&M University and Texas Southern University were recent beneficiaries of that generosity when the sorority presented a $10,000 check to each institution as part of its international program theme “Launching New Dimensions of Service (LNDS).”

Ahead of its biennial conference to be held in Houston July 6-12th where 20,000 members are expected to attend, Alpha Kappa Alpha is sponsoring 29 service projects throughout Houston called “29 Moments of Service.” Projects #10 and #11 involved a campus bench dedication and #ThinkHBCU presentation on the respective college campuses. Alpha Kappa Alpha Sorority International President Dr. Dorothy Buckhanan Wilson presented the donations to Prairie View A&M University President Dr. Ruth Simmons and Texas Southern University President Dr. Austin Lane as part of the sorority’s #ThinkHBCU initiative and in honor of the pioneering students who first enrolled in the universities. The TSU Foundation matched the contribution they received dollar-for-dollar for an endowed scholarship. After the check presentations, members dedicated a park bench on each college campus as part of its Environmental Ownership Target

and to be a permanent reminder of Alpha Kappa Alpha Sorority’s commitment to improving the lives of those they serve. 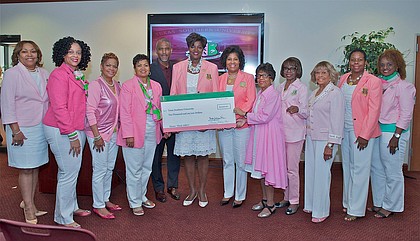 Over the past four years, the sorority has increased its focus on Historically Black Colleges and Universities by raising awareness and funds. Under the LNDS #ThinkHBCU initiative, members have donated more than $10.5 million to the nation’s HBCUs worldwide.