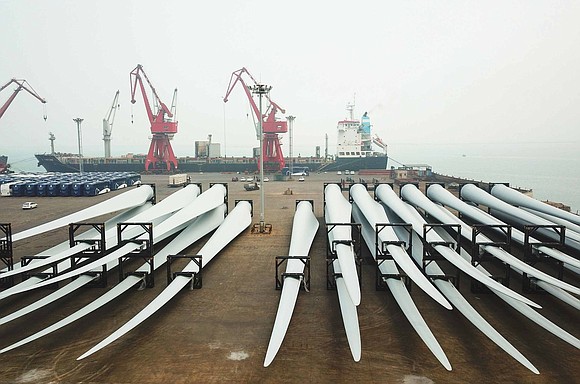 (CNN) -- Trade war fears have returned to Wall Street, wiping out a chunk of the stock market's recent surge.

The Dow plunged 450 points at the open Monday morning after President Donald Trump surprised investors by threatening to impose higher tariffs on China in a late Sunday tweet. But at midday, the Dow bounced back from its initial low, and was down some 170 points.

The Dow is still up about 14% this year, but Monday's plunge at one point wiped out the past three weeks of gains.

The sudden escalation of US-China trade tensions deals a major blow to investors' expectations that Washington and Beijing would reach a trade deal in the near term. Trump's threats raise the risk of a prolonged fight between the world's two largest economies.

Heavy selling knocked the S&P 500 and the Nasdaq, which dropped 1.6% and 2.2% at the open. Just like the Dow, they retraced their initially losses, and were down 0.8% at midday.

The VIX, a market volatility index, jumped to its highest level since January.

"A big underpinning of the rally was this consensus that a trade deal with China would eventually get done," said Michael Block, market strategist at Third Seven Advisors. "This tweet may be a tactic but it has bulls unglued and playing what if."

"Shocking escalation — even on Trump standards," Chris Krueger, analyst at Cowen Washington Research Group, wrote in a note to clients on Sunday.

On Sunday, Trump threatened on Twitter to increase tariff rates on $200 billion in imports from China to 25%, up from 10% currently. The president said the increase would take effect on Friday.

Investors are unsure if Trump is trying to apply more pressure to Beijing to get a deal done quickly, or if he intends to carry through on his threat, market analysts said. Either way, the threat increases the risk that the trade deal could come undone.

The threat also has negative implications for the outlook of other trade spats, including autos and the passage of the the USMCA deal that is set to replace NAFTA, according to analysts at Goldman Sachs.

"His move injects major uncertainty into negotiations, which now face a rising risk of an extended impasse — perhaps even through the US presidential election," Michael Hirson, head of China and Northeast Asia at the Eurasia Group, wrote in a note on Sunday.