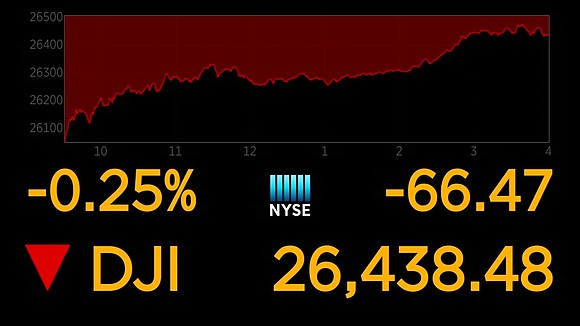 The Dow ended the day down just 66 points.

(CNN) -- The Trump administration is taking stocks on a roller coaster ride. Investors are not pleased.

Stock markets that had been closed on Monday were the hardest hit. Japan's Nikkei shed 1.5% as investors reacted to President Donald Trump's threat on Sunday to escalate tariffs on $200 billion of Chinese goods.

Benchmark indexes in Seoul and London, which were also closed on Monday, dropped by 0.9% and 1.6%, respectively.

Lighthizer, the top US trade negotiator, said the administration would increase penalties on $200 billion of Chinese goods to 25% from 10% on Friday.

Investors were confronted with mixed messages. Despite the threats and accusations, China said it was still sending its top trade negotiator to talks in Washington later this week.

Expectations for a timely resolution of the dispute between Beijing and Washington were a key driver of the 2019 US stock rally. Investors are now trying to figure out whether that's realistic.

The US stock market initially reacted fearfully Monday morning to Trump's threat. The Dow fell as much as 471 points in early morning.

But investors eventually changed their minds, refusing to buy into Trump's bluster. They bet the United States and China would ultimately reach a trade resolution. The Dow ended the day down just 66 points.

After Lighthizer and Mnuchin spoke on Monday, US stock futures tumbled once again.

Investors are worried about the outbreak of all-out trade war. If China were to retaliate with higher tariffs, US companies that do big business in China would end up getting penalized. Companies would then pass the higher import taxes off to customers, hurting demand for goods.

Although the administration officials said the increase in tariffs does not signal the talks have broken down, Mnuchin declined to speculate on whether the two countries would be able to close the gap before the end of the week.