The GOP's Attack On Women

Alabama -- led by utterly clueless male legislators -- just passed the most restrictive ban on abortion in the country, with Georgia and Missouri piling on. Other states dominated by right-wing Republican politicians are jockeying to join in. Their aim is to get the courts, newly packed with right-wing judges appointed by Trump, to overturn Roe v. Wade, the landmark precedent that established a woman's right to choose in the early months of pregnancy.

The new laws generally deem abortion murder after six or eight weeks, no exceptions. This is often before women are even aware that they are pregnant. Some of the laws would imprison doctors; others lock up mothers. This is what the anti-abortion movement has demanded. It has been spurred on by cynical politicians like Donald Trump, who devoted part of his State of the Union address to a blood-curdling description of infanticide that came completely from his own ugly imagination. 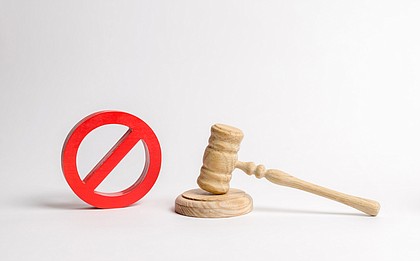 Now anti-abortion activists are on the verge of getting what they want -- the ability to prosecute doctors and/or pregnant women for murder if they choose to abort a fetus early in their pregnancies. Even if the life of the mother is at risk, doctors would be loath to risk imprisonment by taking the necessary step to save her.

Suddenly, right-wing politicians and moral hypocrites are expressing dismay at their victory. Donald Trump, who not many years ago was entirely pro-choice, tweeted that he didn't support the Alabama laws, that he believed in exceptions for rape, incest and protecting the life of the mother. Apparently murder isn't always murder for the president -- or for televangelist Pat Robertson, or for House Republican leader Kevin McCarthy, who said the law "goes further than I believe," because he would allow "exceptions" as a matter of "personal belief."

But as EJ Dionne notes in the Washington Post, if personal beliefs can carve out exceptions to murder, why would Trump's or McCarthy's exceptions weigh more than the considered choices of the women struggling with whether to take a fetus to term? Cynical male politicians weighing how to placate the anti-abortion conservatives without alienating the vast majority aren't making a more moral, more reasoned decision than the woman involved.

Lost in this posturing -- mostly by male politicians -- is the basic reality. Passing laws that outlaw abortions won't end abortions. They will simply make them less safe, putting more lives at risk. And the posturing totally ignores the deep injustices surrounding reproductive rights, as whatever the law is, rich women will retain the right of choice -- even if it requires going to a hospital in another country -- while the lives of poor women, already locked out of any federal support for the counseling and choices they need, will be at ever greater risk. Of course, many of these same politicians pushing these laws supposedly to protect life inside the womb do little to save the lives of those outside the womb, voting to roll back Medicaid, cut aid for women and infant children, slash food stamps and eliminate welfare for impoverished mothers with young children.

Donald Trump revealed his brazen cynicism, tweeting out his exceptions to the Alabama law while pleading with the anti-abortion movement to "stick together and win for Life in 2020." His concern is re-election not making a moral decision on how best to deal with this agonizing concern.

This is an ugly debate. The extremist laws passed in Alabama and elsewhere won't stand, but the result inevitably will be to make it more difficult and perilous for poor women to make the agonizing decision about a pregnancy. The posturing will lead to the punishment of poor women for childbearing, putting more women and more fetuses at risk, and leave more infants born into a life without the basic support -- health care, food, shelter -- needed to have a chance for a healthy life.

I share the concern for life that animates the most sincere opponents of abortion. I also agree that reproductive justice is essential to women. Family planning isn't a sin; it is a vital necessity for ensuring that the next generation of infants is brought into the world with the love and the care they need. In Roe v. Wade, the Supreme Court ruled essentially that it is the pregnant woman who is best charged with making the decision about pregnancy until the fetus is viable. I would trust the women agonizing over that choice far more than politicians like Trump or McCarthy, who cynically weigh how to placate their base without alienating the rest of us.