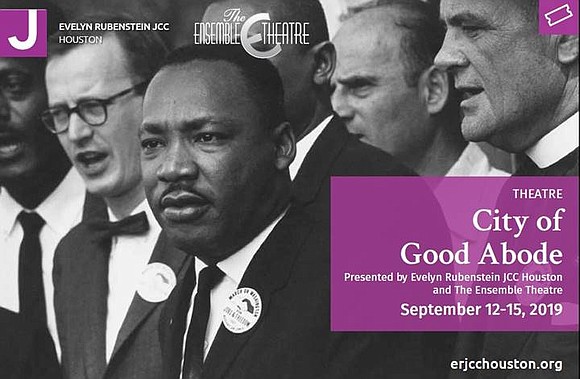 “City of Good Abode’s exploration of relationships among Blacks’, Jews’ and others’ involved in this story created an opportunity for this first-ever collaboration between The Ensemble Theatre and the J,” says Eileen J. Morris, Artistic Director of The Ensemble Theatre. “Both these cultural institutions strive to perpetuate stories that deepen understanding and identify human commonalities we hope affect the eradication of racism.”

Martin Luther King, Jr., ASSASSINATED! Words that shocked a nation in April 1968. Now, through a world premiere co-presentation of the award-winning play, City of Good Abode, Houston audiences can revisit the historic strike by Memphis sanitation workers that led to King’s death. Playwright Joshua Ford’s recounting of the back story to this confrontation also explores the relationship between America’s African American community and the nation’s Jewry, many of whom stood in solidarity with their black “brethren” while others’ support was less enthusiastic.

“We are thrilled to be partnering with The Ensemble Theatre to present the worldwide premiere of City of Good Abode” says Amy Rahmani, Director of Arts & Culture at The J “This play is such a fitting collaboration for our organizations and we’re so excited to bring it to Houston audiences.”

This co-production will be presented in a limited run of four performances, September 12-15, 2019.

City of Good Abode comes to Houston audiences through the Jewish Plays Project (JPP), a national collaborative endeavor that works with communities to join in reading and selecting the emerging new plays of Jewish interest determined the JPP’s annual New Play Contest.

The JPP is also pleased with this partnership,” says David Winistky, president of the Jewish Plays Project. “I was thrilled to hear about the co-production of City of Good Abode in Houston this fall.”

As a feature of its involvement in JPP, The J invites leaders from the city’s theater community to join its team of readers/evaluators so that Houston’s voice in the national conversation on new directions in Jewish theatre is as informed and inclusive as possible. For the last two years, Eileen J. Morris, Artistic Director of The Ensemble Theatre has been a member of the J’s Reader/Evaluator Teams, and when City of Good Abode was named winner of the JPP’s New Plays Contest in 2017, it created an opportunity for The Ensemble Theatre and Theatre at The J to begin talks about partnering to bring City of Good Abode to Houston audiences. Now that partnership has become a reality.

“This is a vital new work, and I can't think of a better team of organizations to bring it to the stage,” says Winistky.

The Ensemble Theatre was founded in 1976 by the late George Hawkins to preserve African American artistic expression and enlighten, entertain and enrich a diverse community. In addition to recognition as the oldest and largest professional African-American theatre in the Southwest, it also holds the distinction of being one of the nation's largest African-American theatres that owns and operates its facility with an in-house production team.

The Ensemble Theatre produces a main stage season of contemporary and classic works devoted to the portrayal of the African American experience by local and national playwrights and artists. The theatre’s Performing Arts Education program provides educational workshops, Artist-in-Residence experiences and live performances for students both off-site and at the theatre; and the Young Performers Program offers intensive summer training for children ages six to 17 encompassing instruction in all disciplines of the theatre arts.