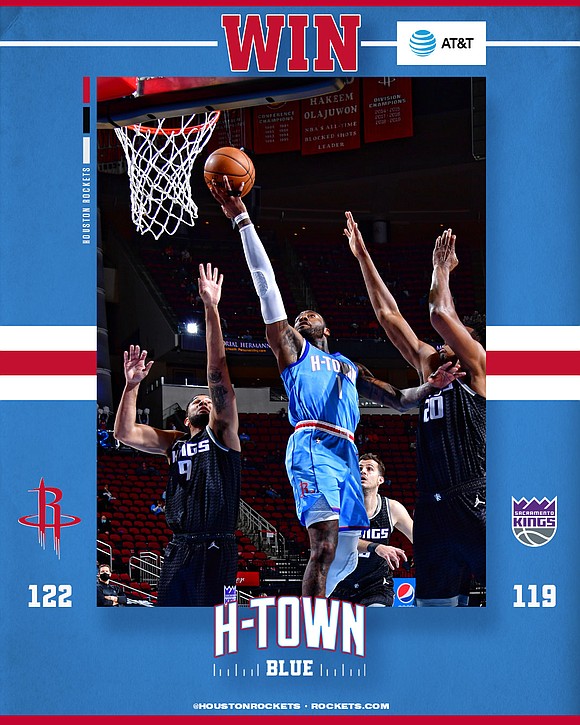 “Should old acquaintance be forgot, and never brought to mind?

Those lyrics from Auld Lang Syne, the famous song sung at the stroke of midnight every New Year’s Eve, and ironically can be sung at funerals, graduations and other occasions to bid farewell, was exactly the song the Houston Rockets needed to end their horrendous start to the 2020-21 NBA season.

The Rockets (1-2) defeated the Sacramento Kings (3-2) by a score of 122-119 at Toyota Center behind another brilliant performance by superstar James Harden who poured in a game-high 33 points. It was the first home game for the Rockets since March 10th when the 2019-20 NBA season was halted due to COVID-19. The win was also the first for head coach Stephen Silas who was hired by Houston after former head coach Mike D’Antoni informed the team he would not return.

“After the game, the team gave me the game ball, so I’ll keep that,” said Silas. “That’ll be one to remember, hopefully one of many. I’ll cherish it.”

There were also more first occurrences for the Rockets on Thursday night. Off-season acquisitions John Wall (trade) and DeMarcus Cousins (free agent signing) made their long-awaited returns back to the hardwood after injuries had sidelined each for a significant amount of time.

Their Rockets debut was delayed a week after each was placed in COVID-19 quarantine protocol after two players tested positive for the coronavirus. Wall finished with 22 points and nine assists, while Cousins contributed eight points and three assists off the bench.

"It was great to get our first win,” said Wall who stated that it had been 735 days since his last time in an NBA game. “My job is to help James as much as possible and to try and make it easier for him."

It wasn’t an easy start for Harden who leads the NBA in scoring at 37.0 points per game. His first made basket came with 2:46 left in the second quarter. His only points before then came off of a made technical free throw basket in the first quarter. Harden would heat up in the second half when the Rockets needed him most. Trailing late in the fourth quarter by four points, Harden scored 10 points of the 12-2 run the Rockets put together to end the game.

“Fourth quarter you have to make shots,” said Harden. “This is a make or miss league. It was time to go and win the game.”

Houston got another outstanding performance from center Christian Wood who added 21 points and 12 rebounds, which was his third double-double of the season, while veteran shooting guard Eric Gordon, who also made his season debut on Thursday, finished with 17 points off the bench.

The Rockets will take on the Kings once again on Saturday at the Toyota Center at 4:00pm cst.