Stop the Spread of Hate to Honor a King

Love has many definitions. The Holy Bible describes it as patient, kind, protecting, trusting, hopeful, preserving, and without the capability of failing. Webster’s Dictionary also has several meanings of love. It is defined as something that commands admiration, passionate affection for someone, friendship, courtship, reverence to God, and gratitude. Martin Luther King, Jr. said, “Love is the only force capable of transforming an enemy into a friend.” Love, ultimately, is powerful when people take action to utilize its energy.

During his 39 years of life, King used the power of love to transform enemies into friends and violence into peace. Love to him had a deeper meaning, a more personal meaning. King’s definition of love was based on a Greco-Christian term called agape love. Known as the highest form of love, it is the love of one’s fellow man. This fueled his mission of nonviolence in fighting for civil rights for all. Through love, King was able to impact change and bring us closer to his ideal world where everyone was seen as equals.

Sadly, the fight for all to be seen on the same footing in humanity is a battle we are still struggling with today. Coming from the top down, we have the President of the United saying out loud what people he wants in America and it is not those from “shhole countries.” There are voter ID laws in some states that negatively affect minorities' voice in the political process. Some police deem minorities guilty of crimes at a higher rate when they are racially profiled for everything from taking the life of someone to just breathing while Black. We live in a time where men sexualized women and it is thought of as a harmless admiration of her beauty since she was asking for it because she wore a short skirt, high heels, and smiled to say hello. Those are just some of the many examples of how racism and sexism are very alive and in practice today. 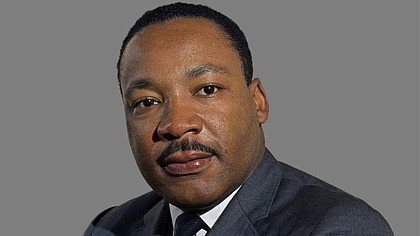 Acts like the above create enemies and fuel hatred. It lives because it festers and is passed on from one generation to the next. However, it stops when it is challenged and offered an atypical perspective. Like when King led the Montgomery Bus Boycott with a nonviolent movement to not ride the buses for 305 days resulting in the ruling by the US Supreme that segregation on public buses was unconstitutional. Or when he started the Birmingham Campaign to change one of the most racially divided cities at the time in 1963 to one where the municipal government changed Birmingham’s discriminatory laws. Or any of the countless other times when King made a conscious decision to not fight with his fists but to use the influence of his words and operate in love.

“Love your enemies, bless them that curse you, do good to them that hate you, and pray for them that despitefully use you,” said King in his Love Your Enemies sermon in Montgomery, Alabama in 1957. According to King loving your enemies requires one to analyze themselves to see what arouses the hate response in others and to look for the element of good in those that speak hate. When those things are discovered you can then begin to discredit hate and transform your enemies.

Allow me to offer these suggestions as to how to show love in the midst of hate and honor a King.

*Pray – Prayer should always be the first approach to any situation. Prayer has the power to change any situation in God’s timing. Pray for hate to end. Pray for hatred to not be taught. Pray for those who believe and practice hate. Pray for love to prevail.

*Do Something for Someone in Need – Good deeds don’t have to be big and grand. It could be as simple as giving a friend a place to stay while they go through recovery. Buying a meal for someone who hungry. Sharing your resources with a friend who is experiencing financial difficulties. Just pay close attention to the people in your life. They could be suffering before your very eyes and too ashamed to ask for help.

*Be Kind – This not only sounds simple. It is simple. Don’t dismiss the janitor cleaning the halls because you think you are above them. Treat all races of people with dignity and don’t disrespect them because of their race.

*Teach the Next Generation to Love – A reason hate has lasted so long is that it continues to be taught. Children come into the world innocent with no thoughts of their own. They learn what they are taught from parents, mentors, the environment, and life itself. We have to be good stewards so children can learn the good and not the bad. If we can stop the teaching of hate we can start the lessons of love.

Adopting these practices not just on Martin Luther King, Jr. but every day of the year will bring peace to our society. King’s dream of all of humanity seen equally will be more of a reality.