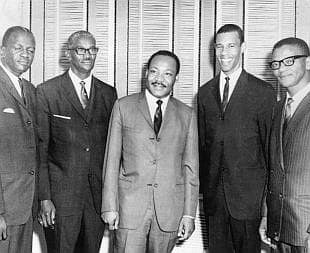 Lawson founded Wheeler Avenue Baptist Church in 1962 with only 13 members. A year later, Martin Luther King Jr. visited Houston, and according to Lawson, almost none of the city’s black churches welcomed the civil rights leader because FBI Director J. Edgar Hoover had accused King of being a communist.

“He was not very popular, but we invited him to our church,” Lawson said.

Since then the church, like the city of Houston, has prospered. Its congregation has grown to more than 19,000 members. Lawson, who retired from Wheeler Avenue Baptist Church in 2004, is now its founding pastor emeritus. He is also the author of “Lawson’s Leaves of Love: Daily Meditations,” offering a spiritual essay based on biblical passages for each day of the year.

“For over half a century Rev. Lawson has played a pivotal role in addressing a range of spiritual and civil needs, and in the process helping to foster opportunity for all Houstonians to live in fullness,” said Anthony Pinn, director of the Center for African and African American Studies at Rice and the Agnes Cullen Arnold Professor of Humanities. “This is a fitting tribute to one whose impact on the quality of thought and life in Texas is without question.”

“Rev. Lawson’s life truly exemplifies the Rice values of responsibility, integrity, community and excellence,” said Bobby Tudor, the chair of Rice’s Board of Trustees. “His impact on Houston has had a lasting benefit for all of us.”