Texans lose third game in a row to start the season

Sometimes life comes at you very hard and very fast. It is something you wish you could control, but I have learned that it is something you can’t. For the Houston Texans, they are trying to do their best to just get out of the whirlwind that this early 2020 NFL season has them in. Houston (0-3) dropped their third game of the season to the Pittsburgh Steelers (3-0) losing in Heinz Field by a score of 28-21.

This is the second time in three years that the Texans have opened a season 0-3, the last coming in 2018 when they dropped the first three games to the Patriots, Titans, and Giants. Although they won the division that year and made the playoffs, this is not how the organization pictured this season would start.

“Everybody knows 0-3 is not where we want to be,” said head coach Bill O’Brien when asked about his team’s rough start to the season. “It's urgency more so than panic. There is no panic. It's just we got to get over the hump here somehow.” 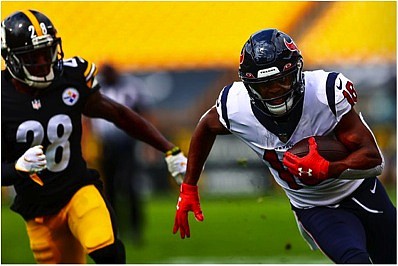 Houston jumped out to an early 7-3 lead behind the brilliant play of Texans quarterback Deshaun Watson who found wide receiver Randall Cobb for a 28-yard touchdown strike in the first quarter. They would increase that lead to 14-3 after running back David Johnson scampered two yards for the score. Pittsburgh responded with two touchdowns led by future Hall of Fame quarterback Ben Roethlisberger to take the lead 17-14, but Watson pulled some late first half heroics and connected with Will Fuller V for a 14-yard touchdown score to put the Texans up 21-17 at the half.

It was the first time all season that Houston led at the half after being down by double digits in the previous weeks against the Kansas City Chiefs and the Baltimore Ravens.

Steelers head coach Mike Tomlin is known around the NFL as a student of the game. He is able to process everything he sees and make the necessary adjustments for his team to make them successful and that’s exactly what he did on Sunday. Pittsburgh pitched a shutout in the second half holding the Texans scoreless and making life very difficult for Houston’s offense.

After giving up 202 passing yards to Watson in the first half, the Steelers held him to 62 yards by mixing up the blitz packages and making sure the run game never got on track. The Texans rushed for 29 yards for the game with 8 of those yards coming after the intermission.

“We just mixed some things up with our coverages and we rushed a little bit differently,” Tomlin said. “We made minor technical adjustments to both the rush and the coverage, and I think that was the difference.”

The Texans must now prepare for a desperate Minnesota Vikings team coming into NRG Stadium this week. Minnesota is also winless on the season and they are coming off of a heartbreaking one-point loss to the Tennessee Titans on Sunday.