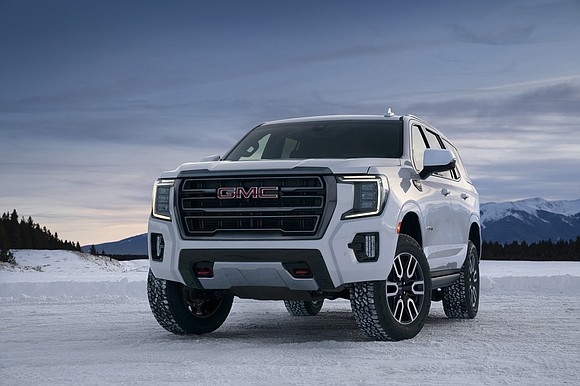 Overnight, that was as long as we had the 2021 GMC Yukon.

But it was long enough to form an opinion. They put a lot of work into this sport utility and made it better, much better than the model it replaces.

Well try and stick to specific areas. The first was the interior which had been completely restyled. It was jet black with beige stitching and seat inlays. It may not sound that appealing but it worked

The instruments were in bunches in front of the driver and under the floating infotainment touchscreen at the center of the dash. There were USB jacks for both Android and Apple equipment. The front seats were heated and cooled, while the second-row captain’s seats were heated.

There were also second row dual infotainment screens that we didn’t even bother turning on much less test. Before we go further, we had the Yukon 4WD AT4 which is a new trim line that will work its way across the GMC portfolio.

Our test vehicle was powered by a 5.3-liter V8 that made 355 horsepower and 383 pound-feet of torque. It was mated to a 10-speed automatic transmission. This powertrain was both smooth and quiet. And it had the oomph to move the GMC Yukon AT4 with ease.

There were all sorts of premium equipment. The Yukon had a power tilt-telescoping steering wheel, a panoramic roof and power liftgate. The third-row seats could be lowered and deployed using power and the second-row seats could be folded using a button in the cargo area.

The Yukon had grounded 120V electrical plugs in the second row and in the cargo area. It had standard USB jacks and jacks for android equipment as well as 12V plugs. It could tow up to 8,200 lbs. and tote 1,702 lbs.

Where they really excelled was the air adaptive suspension. Coupled with magnetic ride control first developed for sports cars, most of the truck-like ride characteristics were gone from the Yukon. It was quite an achievement.

And the second-row access to the third row was impressive. With captain’s seats, you can get to the third row by just walking through the space between the seats. This space used to be kind of tacky, but they’ve managed to smooth it out with better carpeting and finishes.

And conventional access was easier too. The second-row seat slid forward, the back of the seat flipped forward and then the entire seat flipped forward. It was easy. Once in the third-row seats, they were a little firmer than the second row, still, there was plenty of head space and they could hold three smaller people as in kids abreast.