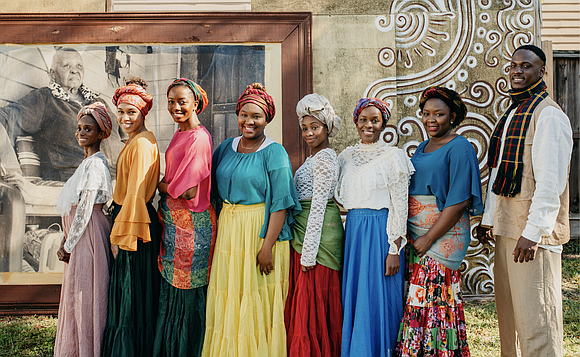 Arts District Houston has commissioned a performance series in honor of Black History Month, highlighting the rich history of Houston’s First and Sixth wards. The first performance will honor Richard Brock and the park named after him, located in the First Ward. It will be a virtual experience and will be made public on February 28, 2021, at 2:00 pm on the Arts District Facebook page. Richard Brock was a lawmaker, civic leader, and formerly enslaved man who purchased land for some of the city’s schools and public spaces. That land is now known as Richard Brock Park.

Choreographed by Lindsay Gary, artistic director and founder of Dance Afrikana, the performance is entitled “In Veneration: Richard Brock” and includes narrations by Cleola Williams. Williams, who is honored in the dance, fought for the park to be named after Richard Brock.

“Our piece was really dedicated to everything Richard Brock did to establish the institutions he built for formerly enslaved Houstonians,” said Gary.

Arts District Houston is one of 300 state-designated districts nationwide committed to attracting artists and cultural enterprises to a local community, creating a hub of economic activity that makes an area an appealing place to live, as well as visit and conduct business. Located along Washington Avenue, Arts District Houston is a part of the Houston community and commissioned this piece to retell the story of one of Houston’s oldest wards.

“We realize that we cannot tell the story of the present without examining the past and including the variety of histories that exist within the narrative. The telling of this story through dance is important to understanding and appreciating Houston’s rich history.

It’s important that we celebrate pioneers like Richard Brock and the artists who help keep their legacy alive, during Black History Month and year-round,” said Marci Dallas, Executive Director of Arts District Houston.

Fresh Arts is headquartered in and is the managing partner of Arts District Houston (formerly Washington Avenue Arts District), an area that embodies Houston’s up-and-coming creative economy. Fresh Arts and its stakeholders amplify the district’s ability to serve artists and the greater community through artist-centered initiatives that help build capacity, audiences, and shared resources for the artists and creative businesses that compose the district. Fresh Arts and Arts District Houston are focused on shaping and growing Houston’s creative economy in a responsible way that ensures the district retains top artistic talent and energy while continually enhancing the livability of the surrounding neighborhoods.

Dance Afrikana, LLC is a professional dance company dedicated to connecting and celebrating Africa and the African Diaspora through dance. It is centered on the idea that dance connects us to our ancestors and therefore to ourselves. Dance Afrikana, LLC was founded in 2016 by dancer, choreographer, and dance educator Lindsay Gary. Initially focused on Afrobeats workshops and performances, the company grew to specialize in various forms of traditional and contemporary African and African Diaspora dance.