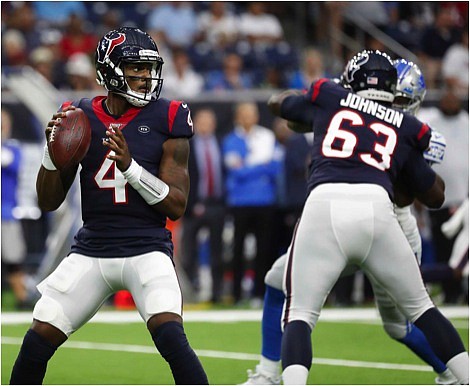 Looking for Another One

Texans look to extend their winning streak against the Panthers

The Houston Texans have plenty to smile about these days. They are currently on a two-game winning streak and are at home on Sunday against the Carolina Panthers looking to make it three in a row.

Texans look to bounce back after tough loss on Monday night

The Houston Texans look to rebound after such a heartbreaking loss to the New Orleans Saints on Monday night (30 -28) in the Mercedes Benz Superdome. Houston will take on AFC South divisional rival, Jacksonville Jaguars on Sunday at NRG Stadium in their first home game of the 2019 NFL season. The Texans look to make it three- straight against the Jags after winning the last two meetings (20-7, 20-3).

When I was a teacher I use to give out different projects throughout the year that had a completion date in order for the student to receive a grade. Most of the time that due date was at least six weeks out from the day I assigned the project.

Texans fans got a glimpse of what the upcoming season is going to look like as they watched the hometown team defeat the Detroit Lions 30 – 23. The first team offense under new offensive coordinator Tim Kelly put together a great 75-yard scoring drive that was capped off by a 4-yard touchdown pass from Deshaun Watson to DeAndre Hopkins.