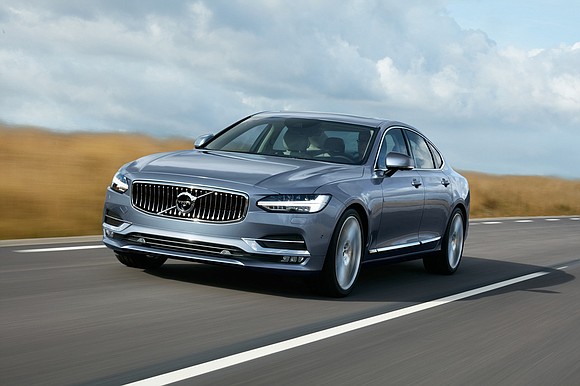 DETROIT – While at a gathering during our week-long test drive of the 2017 Volvo S90, a friend commented that he didn’t know that Volvo made cars like that. The “that” meant full size luxury sedans of the first order.

Volvo’s new flagship reminded us of what a designer said years ago about automotive luxury. It’s conveyed in the interior of a car and Volvo certainly did that with the S90.

Like Scandinavian design which is a minimalist philosophy, inside the Volvo S90 was awash in what the automaker called natural open pore walnut which was used as a design feature rather than because that’s what you do, use a dollop of wood to justify cost. It conveyed an air of luxury.

The perforated leather of the seats, the front pair was heated and cooled while the back seats were heated, aided in conveying sumptuousness. Volvo has one of the best seat designs in the industry with safety being the prominent theme but the S90’s seats accentuated the luxurious ambience of the car too.

Working its way across Volvo’s new 90 series was the vertical 9.3-inch vertical touchscreen. It employed infrared sensors which meat it would work when wearing gloves. The screen had the feel of a smartphone meaning command channels and selections slide across the screen or up and down it with the flick of a finger and selections were made with a tap on the screen.

Volvo went with a full digital instrument display. It was 12.3 inches wide, it was adaptable and it could and did show navigation, media, speed information and the gauge cluster. It would post the speed then let us know by flashing the speed limit icon a few times when we exceeded it. There was also a red line on the speedometer to double the warning. And the speed limit sign in the heads-up-display would flash a few times too. No way could we not know when we were speeding in the S90.

The car had three different ways of communicating information to the driver. Important and crucial safety information was displayed in the TFT screen via the heads-up display or the digital driver display. Information and commands that could be taken care of at the driver’s discretion were displayed in the 9-inch Touchscreen in the dash.

For instance, the car would calculate the speed and the distance from the vehicle ahead and would flash a warning icon if we were following too close to safely stop. Anyway, the 2017 Volvo S90 had a 19-speaker premium audio system which is very important in the luxury segment. The sound quality was excellent.

The car’s grille looked upright but it was slightly concaved inward with Volvo’s iconic iron mark badge in the center. And Volvo’s famed shoulder was there too but it was concaved and offset. Thus, it didn’t look bulky or give the car a boxy appearance. It ran the length of the car.

Our S90 had LED headlights featuring Volvo’s Thor’s Hammer design DRLs; it had short overhangs, a long nose and short rump, that high shoulder line and a long dash to axle ratio. That would be the distance from the top of the dashboard to the axle. It meant the height of the front side of the car.