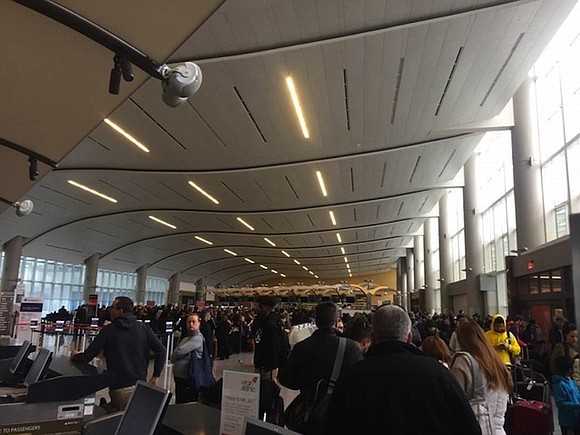 The lights flickered on shortly before midnight, after an exhausting day for travelers, that had left thousands stranded in dark terminals and on planes sitting on the tarmac. A ground stop in Atlanta disrupted air travel across the United States and led to cancellations of more than 1,000 flights in and out of the airport.

Shortly after power came back, some passengers lined up at security screening, hoping to beat the crowds as the TSA checkpoints re-opened at 3:30 a.m. The airport could see a logjam of passengers and delays as more than 400 flights have been canceled Monday.

The outage, which affected all airport operations, started with a fire in a Georgia Power underground electrical facility, Atlanta Mayor Kasim Reed said. The electrical fire's intensity damaged two substations serving the airport, including the airport's "redundant system" that should have provided backup power, Reed said.

Atlanta is the heart of the US air transport system, and the disruption led to 1,180 flight cancellations to and from the airport Sunday, according to flight tracking service FlightAware.

Delta, which has its largest hub in Atlanta, canceled 300 flights Monday, most of which are morning, inbound flights to Hartsfield-Jackson. Delta tweeted that it expects flight schedules "to return to normal by Monday afternoon."

But weather could complicate matters in the morning as a dense fog advisory is in effect.

"There's a lot of other issues downstream to all other airports, where flights should be arriving and departing, connecting to Atlanta, that are going to be disrupted as well. So we're talking possibly millions of people disrupted over the next few days and it is certainly not going to be fixed in one day," he said.

Cause of fire unknown

At 12:38 p.m., Georgia Power noticed outages in the system that were traced to a fire in underground tunnels where the airport's electric system lives, spokeswoman Bentina Terry said. The fire caused multiple faults that led to the full blackout at 1:06 p.m.

The fire's intensity prevented Georgia Power crews from immediately being able to access the tunnels and work on restoring power, Reed added. By 3:30 p.m., fire crews were able to contain the fire and started to work on restoring power. The cause of the fire has yet to be determined, but nothing suggests it was set deliberately, he said.

"We certainly understand that the outage has caused frustration and anger and we are doing everything that we can to get folks back home right away," Reed said at a Sunday night news conference.

Georgia Power said in a statement that its equipment -- a piece of switchgear -- which was in an underground electrical facility, could have failed and started a fire. The incident is still being evaluated, according to the utility.