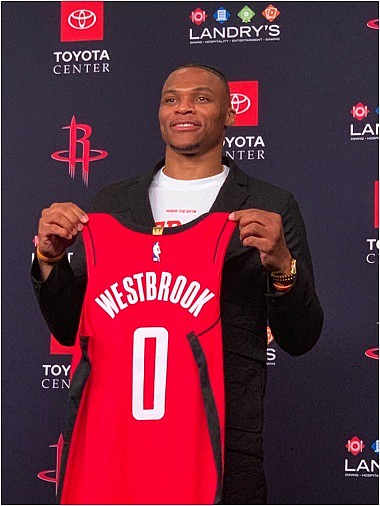 Houston - The “Brodie” era has officially begun in Houston.

Russell Westbrook was introduced on Friday after being traded to Houston from the Oklahoma City Thunder for Chris Paul and two first-round picks in 2024 and 2026 with the rights to two first-round swaps in 2021 and 2025. The 2016-17 MVP was introduced by Rockets General Manager Daryl Morey who could hardly contain his excitement knowing that he had brokered a deal that could potentially bring the city of Houston another NBA championship.

Morey opened up the press conference by thanking Chris Paul for his time in Houston but wasted no time in telling the media members in the room how he felt about having such a dynamic talent like Westbrook.

“To get something great, you have to give up something great,” said Morey. “We are here for one purpose only and that is to take that next step that we have been trying to do for the last few years and we feel like Russell can do that.” 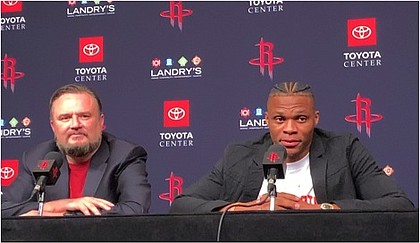 Westbrook, who is coming off is third consecutive season of averaging a triple double opened the press conference by letting the critics know that there will not be an issue playing with his former teammate in OKC.

“James and I have been friends for many, many years. Since I was 10 actually.” Westbrook said. “We played together in Oklahoma City, so to win at something you have to be willing to sacrifice some parts of your game, and we both understand that.”

Rockets guard James Harden was also in attendance for the press conference to welcome the eight-time All-Star to the Toyota Center. Sitting front row with Rockets CEO Tad Brown, Harden didn’t miss any opportunity to make small jokes and share some laughs with his new teammate.

While grateful for the opportunity to compete for a championship here in Houston, Westbrook also took the time out to thank the Thunder organization for everything they had done for him over his 11-year career. Selected 4th overall in the 2008 NBA draft by the Seattle Supersonics (which relocated to Oklahoma City), Westbrook leaves a legacy behind as the leader in points, rebounds, assist, and steals in OKC.

“I can’t take on the next journey without thanking the Oklahoma City organization, said Westbrook. “Just for taking me in and drafting me.”

The Rockets will be gaining an advantage with Westbrook that they didn’t have with Chris Paul and his time in Houston. Since entering the league in 2008-09, he has played in 80-plus games an NBA-high seven times and has only missed a total of 14 games over the past four seasons. Paul missed a total of 48 games during his two seasons with the Rockets (averaged 58 games out of 82 both years) and some would say that the hamstring injury he suffered in Game 5 of the 2018 Western Conference Finals against the Golden State Warriors cost Houston a chance at winning it all.

Outside of being able to compete for a championship and having one of his best friends in the league on the team, the energetic point guard choose Houston because he believes in the roster that has been assembled by Morey and head coach Mike D’Antoni.

“The guys here compliment the game and do a lot of things for the game and I am just here to help them out,” said Westbrook who has averaged 8.4 assists for his career. “You understand what guys are capable of doing and I am here to help bring extra out of guys and my teammates. Maybe they can help bring extra out of me as well. I am always looking for ways to improve my game.

One might think that Westbrook would have a hard time getting use to the Houston traffic or even the complicated offensive system that coach D’Antoni and his coaching staff has put together. But it is actually the weather that he says will take some getting used to.