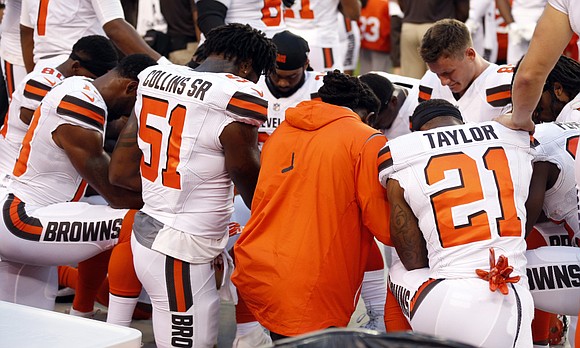 by Andrew Joseph via Michael Bennett said a white player needed to kneel during the anthem. Seth DeValve listened. | For The Win

Seattle Seahawks defensive end Michael Bennett sat for the national anthem during the Seahawks’ first two preseason games — something he says he’ll continue to do for the regular season — and he said that it would take a white player joining the national anthem protests to really change the conversation.

DeValve (No. 87, above) joined teammates Jamie Collins, Christian Kirksey, running backs Duke Johnson and Isaiah Crowell, wide receivers Kenny Britt and Ricardo Louis, safety Jabrill Peppers and cornerback Jamar Taylor in taking a knee for the anthem before a preseason game against the Giants. DeValve is the first white player to kneel for the anthem since Colin Kaepernick started his protest last season.

While Kaepernick remains without a team, Bennett and many other NFL players have continued that protest. On Wednesday, Bennett said that it would take a white player kneeling to amplify the conversation about social injustice in the U.S.

“It would take a white player to really get things changed because when somebody from the other side understands and they step up and they speak up about it … it would change the whole conversation. Because when you bring somebody who doesn’t have to be a part of [the] conversation making himself vulnerable in front of it, I think when that happens, things will really take a jump.”

In recent weeks, Chris Long and Derek Carr were among white NFL players who gestured support to teammates by placing their hand on a teammate’s shoulder while standing. DeValve is a second-year tight end from Princeton. He’s made past community outreach trips to Mexico and was the team’s religious leader at Princeton.

After the game, DeValve spoke about his decision to kneel.

Source: Michael Bennett said a white player needed to kneel during the anthem. Seth DeValve listened. | For The Win