Astros Fever: Verlander sets the tone as the Astros defeat the Indians in Game 1 of the 2018 ALDS 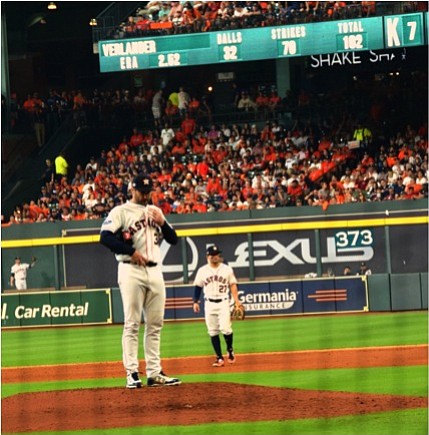 “Well, I started to feel a little sick a couple of days ago when they announced that the game would start at 1 pm today. So, When I woke up this morning, I just couldn’t make it to school. I mean (a dramatic cough), you know (another dramatic cough), I didn’t think it was a good idea to spread what I had to other kids,” said the 10-year old who shall remain nameless to protect his identity. Well, that and if I tell on him I will have to tell on the large number of adults and other children who I guess mysteriously caught the same bug going around Houston and surrounding areas this time of year.

The Houston Astros began their bid to become back to back World Series Champions with a win over the Cleveland Indians 7 – 2 in the 2018 American League Divisional Series. Houston was powered by an awesome array of pitching from starter Justin Verlander (1-0) who carried a no-hit bid going into the 6th inning. He ended up leaving the game with the bases loaded, but not before he confused Indian hitters by retiring 13 batters in a row from the 1st through the 5th innings.

The American League leader in strikeouts walked one of the first 16 batters he faced while striking out 7 in 5.1 innings on his way to his 7th career postseason win. The victory today also ties him with John Smoltz and Andy Pettite for the all-time MLB postseason record Verlander was asked by reporters after the game about pitching in big moments like the one today and having such a dominant performance.

“I have always enjoyed the moment. I think it’s something that you don’t take for granted because you have worked hard all year long to make the playoffs, so you just want to go out there and succeed,” he responded.

Houston’s bats came alive in the fourth inning to go along with the work their starting pitcher was putting in. 2018 All-Star game MVP and dynamic third baseman, Alex Bregman got things started by blasting a solo home run over the left field wall in the bottom of the fourth inning off of Indians pitcher Corey Kluber (0-1). It took Astros fans back to his 1st postseason at bat in last year’s Game 1 ALDS where he hit a homer to jump start Houston’s offense on that day.

“It’s fun to play these types of games. All the fans here today were unbelievable and keen on every pitch. You got to love having the bat in your hands in these situations and that’s why I love playing for this team because every guy in this clubhouse wants to be up there with the game on the line,” said Bregman of the energy throughout Minute Maid Park.

Watching Bregman’s homerun sail over the wall must have been Deja’ Vu for Astros second baseman Jose Altuve. In last year’s Game 1 of the postseason, he followed Bregman’s home run with a shot of his own. This year he watched 2017 World Series MVP George Springer hit a solo homerun in the bottom of the fifth inning and followed that with one of his own. It was the fourth time in club history that the Astros hit back to back homeruns in a postseason game. Springer also became only the third player in MLB history to homer in five consecutive games. He now owns the club record for most extra-base hits (15). The 2018 All-Star talked after the game about the great chemistry the Astros have in the locker room that carries over onto the field.

“Our clubhouse is not like any other clubhouse I have seen. It’s fun to come to the park, it’s fun to play with each other. All 25 – plus guys are cheering for each other to succeed. Having guys like Brian McCann and Jose Altuve set the tone of going out having fun and enjoying the day. At the end of the day we are playing in front of a great crowd and a great city,” said Springer.

Astros fans stood on their feet in the top of the ninth inning as closer Roberto Osuna finished the game, you could feel the excitement and joy throughout the ballpark. As I looked around a question popped into my head that probably I would only think about. What will the note to the teacher say on Monday for all the kids who came to the game today? Parents should just write, “Never Settle” on a piece of paper and call it a day.